A brief description on Sabie and it's history as written by Mpumalnga Happenings. 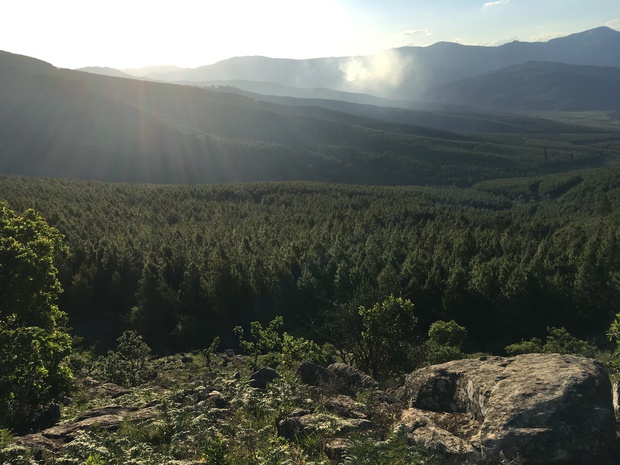 The history of the origins of Sabie, as written by Mpumalnga Happenings.

Sabie is a beautifully situated little town, and is one of the towns along the renowned Panorama Route. it is ideally situated as a base from which to explore the rich history of the area. Sabie is a small country town in a deep valley on the escarpment of the Drakensberg mountain range in the Mpumalanga (" place of the rising sun ") province of South Africa. The town is located 360 km (220 miles) east of the Johannesburg International Airport and 64 km (40 miles) west of Kruger National Park.

The area has always been malaria-free because of its high altitude.  Because of this, pioneers in the early days used the area as their base camps when hunting and exploring down into the Lowveld.  The local Shangaan people called the river " uluSaba" - "the river of fear" because the river was often in flood and teemed with crocodiles.It is from this Shangaan word that the town's name - Sabie - was derived.

Sabie was originally a farm named Grootfontein (meaning Big fountain). In 1880, Henry Thomas Glynn bought it for 600 British pounds and he and his son farmed and became celebrated big-game hunters. The Glynn's were renowned for their hospitality and in the year 1895, they were entertaining a group of friends at a picnic at the Klein Sabie Falls. After lunch they lined up the left over bottles to use as target practice. The bullets shipped the rock and exposed the gold bearing reef. They crushed and panned samples and the results revealed good gold. This started a gold-rush into the area and this started the town of Sabie.

Soon many indigenous forests were destroyed to supply firewood and later mine props. The mining was the actually the start of the huge timber industry in the area around Sabie.Joseph Brook Shires realised that man-made forests would be necessary. He planted the first commercial trees in 1876 and today Sabie is surrounded by one of the world's largest man-made forests. the Government launched vast afforestation schemes in the area with a view to providing employment to thousands of farmers who had succumbed under the 14 years drought and the depression years (1929 to 1932).

There are many lovely views around Sabie, and spectacular waterfalls, such as the Sabie Falls, the Bridal Falls, Lone Creek Falls, the Horseshoe Falls and Cathedral Falls to name but a few. Trout fishing is good, the hiking trails are exciting and the cycling trials are full of adrenaline pumping moments.

11 kms from Sabie are the Mac Mac Pools with attractive picnic areas. Sabie has an altitude of 1 000 metres above sea level, with summer rain.The average rainfall is more than 1 200mm per annum with even higher rainfall figures on the mountain slopes above Sabie.   Most of the rain falls between October and April with the highest rainfall in January and February (170 - 190mm per month). Thunderstorms, with occasional hail, occur often but most of the rainfall is soft rain, often lasting several days.