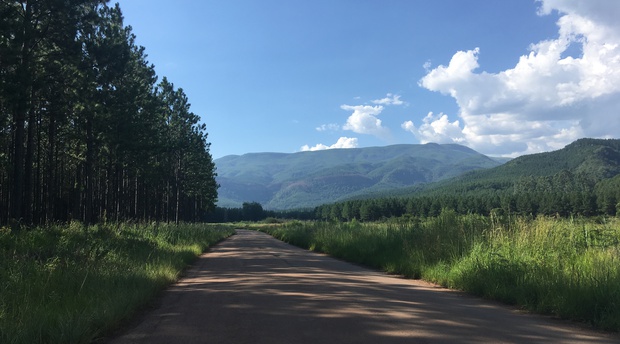 A summary of Mpumalanga's Panorama Route.

The Panorama Route
From Wikipedia.


Points of interest along the Panorama Route
The Panorama Route is a scenic road in South Africa connecting several cultural and natural points of interest. This route, steeped in the history of South Africa, is situated in the Mpumalanga province. The route is centred around the Blyde River Canyon, the world’s third largest canyon, and features numerous waterfalls, one of the largest afforested areas in South Africa, and several natural landmarks. The route starts at the foot of the Long Tom Pass just outside Lydenburg, following the natural descent from the Great Escarpment to the Lowveld, and ending at the border of the Mpumalanga and Limpopo provinces near the Echo Caves.

History
This route is deeply entrenched in the history of South Africa. From 1871, parts of the route were used as a transport road between Lydenburg and Delagoa Bay. It is also on this route that General Louis Botha fled from the English during the Anglo Boer War, and houses one of the most famous Victorian age canons in the world, “The Long Tom”.

Many towns on the route, such as Pilgrim’s Rest, were established during the Transvaal gold rush in the late 1800s. Thousands of fortune seekers crossed the treacherous mountains and rugged terrain in the search of gold. One of these was a former storekeeper from Pilgrim’s Rest, Percy Fitzpatrick. He wrote the popular book Jock of the Bushveld, recounting some of the adventures he shared with his faithful bull terrier Jock, whilst traversing this famous route.

Towns
Lydenburg
Main article: Lydenburg
This historic town was founded in 1850 by Voortrekker leader Andries Potgieter. For a brief period it served as the capital of the Zuid-Afrikaansche Republiek.

Long before this, a mysterious civilization occupied the region. The Lydenburg Heads are hollow terracotta sculptures dating back to 500AD. These sculptures are believed to have been used in religious ceremonies by these people. The Lydenburg museum showcases some of these finds.

Alluvial gold was discovered in 1873, and the town experienced a brief gold rush. The town also featured prominently on the route from the Transvaal Republic to Delagoa Bay. Today Lydenburg is known for farming, trout fishing and mining. The Panorama Route starts just outside Lydenburg at the foot of the Long Tom Pass.

Sabie
Main article: Sabie
Sabie is known as a forestry and tourist town. The town was inhabited by the Sesotho in the early 1800s. Europeans settled in Sabie from 1873, when gold was discovered in the area. Since it is a high altitude town, it was used as a base for early big game hunters, as it was malaria free. The river (also known as the Sabie river) often flooded and was infested with crocodiles; hence the local people called it uluSaba - the river of fear.

Blyde River Canyon
The natural forests were cleared to supply wood for the mining industry. Through the foresight of Joseph Brook Shires, commercial trees were planted in 1876, leading to Sabie being surrounded by one of the largest man-made forests in the world today.

Graskop
Main article: Graskop
Graskop's history can be traced back to 1837, when the Voortrekker leader Andries Pretorius and his followers were looking for greener pastures. He wrote in his memoirs of leaving women behind in Graskop (translated as "grassy hill") whilst looking for an ox wagon route to Delagoa Bay.

Today Graskop mainly serves as a tourist town in close proximity to many natural landmarks such as God's Window and Bourke's Luck Potholes.

The Royal Hotel, Pilgrim's Rest
Pilgrim's Rest is approximately 35 km north of Sabie. The whole town has been classified as a national monument. It is a restored gold-mining town with several curio shops and Victorian buildings. Its history can be traced back to 1873 when Alex Patterson discovered alluvial gold. It soon became known as a fortune seeker's town, with close to 1500 "diggers" joining Patterson within a year. Later a mine, Transvaal Gold Mining Estates, was established as the first listed gold mining company in South Africa. National Gold Panning Championships are held annually in the village and visitors can also book a panning experience.

Legend has it that a French-Canadian, only known as Perry, settled in the area whilst fleeing from an alleged murder charge. He started a trading store, but after his death the farm was sold, and one of the first private game reserves in South Africa was proclaimed on the land.

The economy of this town is driven by tourism, agriculture (specifically banana farming), and retail.

A view of the Echo Caves
Ohrigstad is a small town on the border of Mpumalanga and the Limpopo province. The town was established by Voortrekkers in 1845, and is named after Voortrekker leader Andries Hendrik Potgieter, and G.G. Ohrig, an Amsterdam trader who wanted to cultivate trade between the Netherlands and the Zuid-Afrikaansche Republiek.

The town is now home to some game farms and commercial agriculture. The famous Echo Caves are situated about 28 km north of the town. These caves were discovered in 1923 when the owner of the farm Klipfonteinhoek observed his cattle disappear into the cave, drawn to the fresh, cold water.

Kiepersol
Main article: Kiepersol
Kiepersol is a small village close to Hazyview. It is predominantly an agricultural community with large banana plantations, as well as other fruit farming activities

Points of interest
Waterfalls
There are several waterfalls on the route. Most of these waterfalls fall under the jurisdiction of the provincial parks boards. They are open to the public, and many are associated with hiking trails.

Historical and cultural sites
Due to the rich history of the area, the Panorama Route is home to several important cultural and historical sites. These include the following:

Shangana Cultural Village - a traditional village that celebrates the Shangana people
Lydenburg Museum - This museum showcases exhibits of early human settlers in the area, the most famous of which are the Lydenburg Heads. It also gives visitors a view of the ethnographic history of the Pedi people.
Joubert Bridge - one of the oldest bridges in the area. It was built to cross the Blyde River, and provide a passage between Pilgrim's Rest and Lydenburg. Italian engineer, Giovan B Gilletti was commissioned and the bridge was officially opened in 1897 by Jacobus Stephanus Joubert, the mine commissioner of Pilgrim's Rest. The bridge was named after him, and can still be used today.

Landmarks
The Mpumalanga area is rich in natural phenomenons, and the majority of these can be found on the Panorama Route.